Brrrr.... It's getting chilly in NYC!  Time to whip out the fur and fabulous sunglasses.  Fall is the best weather for seasonal clothing ever.  It's chilly, so you want to be warm, but it's also sunny, so you want to protect your eyes.  Two items everyone (men and women) need in their collection for the fall and winter are:

1. Something very warm (we'll save this for when it gets really cold)
2. Statement sunglasses

While I'm still hunting around for Super Junior Heechul's sunglasses from Mr. Simple (Heechul shows up two seconds into the video), I'm still look at all available trends for my fall statement sunglasses

So I spotted this pair that seems similar to Heechul's sunglasses, from Gucci's collection and Super Junior Kyuhyun was wearing it:

Credits: as listed in the picture

But it's not quite the same, so I'm still on the hunt.  CIGI? Yes. Of course you can get Donghae's and Kyuhyun's Gucci Vintage Inspired Stripe Aviator Sunglasses (220USD).  I found the exact pair at Nordstroms' online or you can check Gucci's official store online!

I personally prefer the Gucci Round Metal Aviator Sunglasses below (295USD), and they seem to look more like the pair Heechul is wearing in Mr. Simple.

I've found a collection of sunglasses that has caught my attention: Super Sunglasses!  They've been around for a while, handcrafted in Italy, and seem to be a retro interpretation of the Original Ray-Ban Wayfarer below -- Heechul pictured wearing a pair (120-200USD; the pair below is 195USD). [FYI: Ray-Ban Aviators are also very common and very popular during the summer and fall.  Super Junior Donghae looks really warm and cozy in his winter gear and Ray-Ban Aviators. 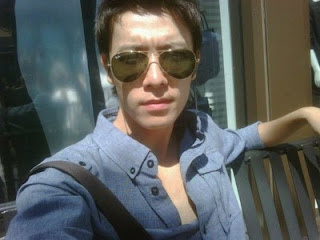 Super Flat Top Black priced at 115EUR, ~158USD is very similar to the Original Ray-Ban Wayfarers, but the "flat top" design makes it seem like it's from the future.  And it just looks so darn cool!

And many K-Pop artists seem to agree!  Below is a picture of Heechul wearing the shades and his Super Junior buddy Sungmin. 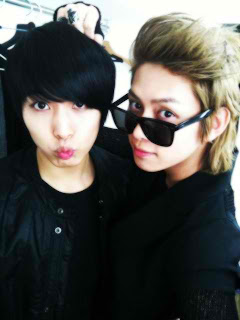 Credits: http://koreanfashiononline.org/tag/sungmin-suju
And SHINee's Key was also spotted in a pair:

Credits: SSTV, YouTube and AmericanKPopFans.com!
Don't Taeyang and G-Dragon look awesome in their Super Sunglasses?  G-Dragon is wearing People Francis (145EUR, ~199USD) -- very hot pair with the gold bridge: my favorite! Btw, G-Dragon's military inspired wool coat is just so stylish!  (I'm on the hunt for it too!)

So many choices for the fall/winter statement sunglasses, which pair will you model this fall? All of them? O__O *jealous stare*
Posted by JagunEsq at 4:19 PM