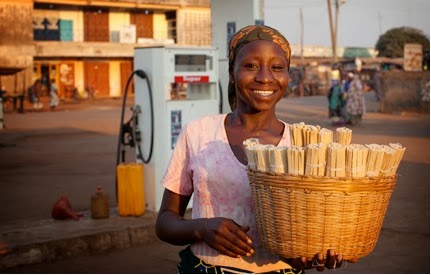 I miss Mama.  "Mama" is my maternal grandmother and I spent a lot of time with her growing up because she lived with us on and off.  I would pretend to (un)braid her hair and we could talk about nothing for hours. She passed away in April of 2010.  Every so often, I think of something that reminds me of her and I miss her.

Mama was a huge proponent of traditional remedies, from agbo (tastes like death) to using efirin in everything (smells and tastes great).  But the one thing she used on a daily basis was her pako a.k.a. a chewing stick.  I don't think I ever saw her use a toothbrush, and she had a full set of pearly whites her whole life! In about a day, they look like this (because people chew on the sticks all day): 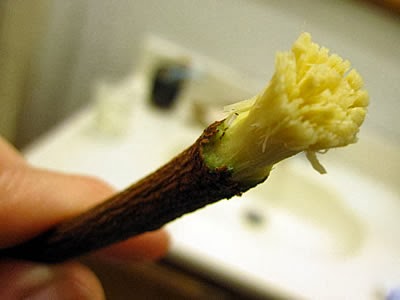 Lately as I try to reconnect to traditions that I grew up with, I think of small ways that I can honor those traditions again.  Pako is such a simple way... Especially since I use a toothbrush multiple times a day.  (I'm lying by the way--I hate brushing my teeth so I tend to brush only once a day.  Sue me.)

According to Afro Style Mag:

Once used by the Babylonians (3500 B.C.), Egyptians, Greeks, and Romans, the chewing stick of old was simply a small wood "toothbrush" used in our predecessors' daily oral hygiene. Although Europeans once took advantage of this simple method, the chewing stick fell out of favor with them over three hundred years ago. Although the most common source of the chewing stick is the saltbush (also called toothbrush tree) in the Middle East, in West Africa, orange and lime trees are used, while the neem tree (neems) is the main source for chewing sticks in the Indian subcontinent. Astonishingly, nearly three hundred different species of trees and shrubs in East Africa are used in making chewing sticks! Chew sticks are usually nothing fancy--they are simply made out of frayed twigs.

Through Africa or Asia, you may come across people casually chewing on a stick much like people may have a toothpick in their mouth. The twigs are generally cut to a thickness of a pencil; and are chewed until the end of the stick frays. The frayed end works like dental floss cleaning in between teeth keeping teeth and gums healthy. Once the end of a chew stick is frayed it can be rubbed on teeth, much like using a toothbrush, scrubbing food and plaque off teeth. Chew sticks are much less expensive than traditional western toothbrushes making them much more accessible.

More than just a brush, it was discovered that the twigs and roots of certain plant species used in making the chewing stick, contain chemical compounds that slow the formation of plaque. In addition, extracts of other sticks have proven to possess antibacterial and anti-fungal properties. For instance, the twigs of the aforementioned toothbrush tree have been found to help prevent ulcers. And in Namibia, chewing sticks made from a plant known as muthala, inhibit the growth of pathogens that cause gum disease, tooth decay, and sore throats. Chewing sticks possess the ability to prevent cavities, as well as strengthen the users' roots and gums.


Curious to try it out? Africa Imports has a selection of chew sticks with a range of colors and flavors.
Side note: My locs are in! I'll make a post about the experience after having them in for a few more weeks.
Posted by JagunEsq at 10:52 AM